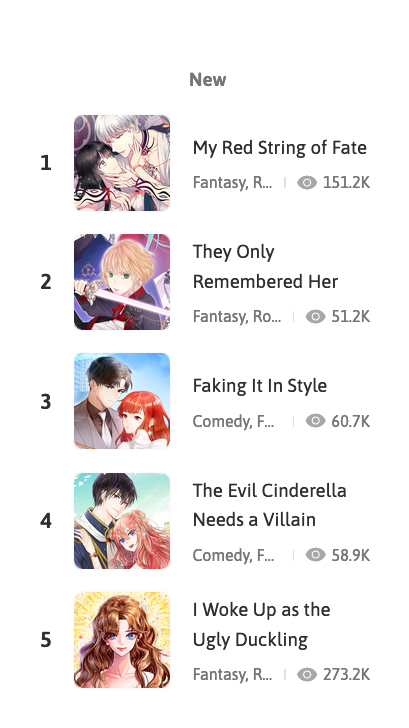 Here are the currently promising manhwas that’s new on Tappytoon. I am in the mood to read something new. I figured, why not see what are the rising manhwas in different platforms.

1. My Red String of Fate

After getting pulled into a novel, Leann lives her life as a priestess in a temple, while healing people who are tangled up in red strings. The red string is a death flag that slowly ruins the body and brings you closer to death. And other than the main protagonist, Leann is the only one who can see and remove them.
But when she heals an injured man on the street, the red string of fate connects the two of them together, and there is no way of removing it! To make matters worse, the man she is connected to happens to be the worst villain in the novel, Abell! Can she escape from him and live a peaceful life without hindering the original story of the novel?

2. They Only Remembered Her

Clarence left home a peasant and returned a war hero, but she could do without the burden of all that glory. Tormented by the bitter memories of her time on the battlefield, she abandons her knighthood and sets off from the city. But despite her hopes for a quiet return home, Clarence’s disappearance causes quite a stir in the capital. Now she has the likes of an imperial prince, a snarky magician, a wise priest, and a loyal knight all hot on her trail. It turns out that her comrades in war possessed much fonder memories of her than she had ever imagined. As the search goes on and Clarence struggles to put the past behind her, this dame may just come to find that some memories weren’t meant to be forgotten.

3. Faking it in Style

Suah is a petite, red-haired designer who leads a drama-free life… until one morning, she wakes up tied to a chair. The man scowling down at her is none other than her roommate’s scary older brother, Seung-hyun, the owner of the apartment she’s been living in rent-free for the past eight years. He gives her one week to pack her bags and move out. Panicked Suah tries to plead and beg, but the coldhearted Seung-hyun’s got the upper hand. That is, until he runs into Suah at work. Turns out she’s not only an essential member of the new team he put together, but also one of the best employees he’s ever worked with. Like it or not, the two are stuck with each other for the foreseeable future… Can Suah convince Seung-hyun to let her stay? And how will Seung-hyun keep things professional with the woman he wants to kick out of his house?

4. The Evil Cinderella Needs a Villain

All Lilith wanted was for Prince Calix to love her back. Blinded by jealousy, she tries to sabotage the prince’s relationship to the kind Princess Silvia, but ends up being sentenced to death instead. When she opens her eyes, however, she finds herself alive and well inside the world of a novel she’d been reading. Grateful for a second chance, Lilith vows to be a good person this time around and live a long, happy, drama-free life. That is, until her wicked stepmother and stepsisters try to sell her off to a baron with a nasty reputation. Desperate to save herself, Lilith teams up with Francis, the handsome villain of the story. Together they put on a show to fool the family…but will Lilith’s plan succeed? Or will she have to resort to her old evil ways?

5. I Woke Up as the Ugly Duckling

What good is being reborn as the duke’s daughter when you’re the shame of the family? While her siblings were talented and beautiful, poor Sylvia was called fat and ugly, with a rumored bad personality to boot. Acting out for her cold father’s attention only got her exiled from home and made her take her own life. But when the new “Sylvia” wakes up five years before her death, she could care less about the snarky opinions of others–she’ll live this life her own way. In a world crawling with demons and thieves, she must use all the resources at her fingertips and prepare to survive on her own. Once she does, it’s goodbye to her family and the naysayers… so why are the people who never cared about her before starting to take an interest in her?