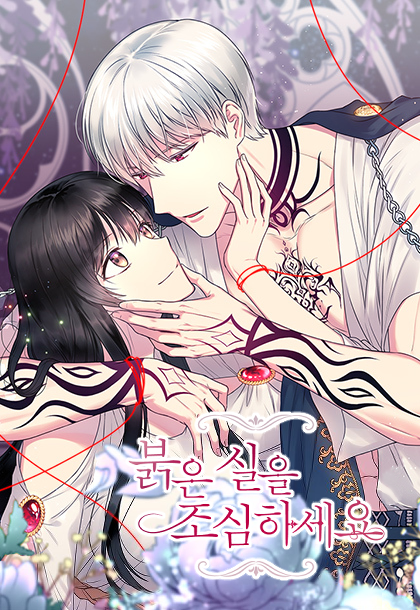 Here’s a recap of the first 15 chapters of My Red String of Fate. Scroll down to the characters to skip the recap and head straight for the review.

If you don’t want spoilers, read it here: Tappytoon

So… how did all of this started?

Lady Leann is a human priestess in a sea of monsters. She transmigrated as from the modern world to a novel. As a rule of the thumb, only good-looking human-like beings were allowed in this story. Either that or be an ugly monster.

Seeing red strings on monsters, humans or any living being meant they’re closer to death. Leann was the only person who can “cure” this. She lived in the Temple of Remda. Cercopia was a talkative spider who acts like a human being and is the head priest of the temple. He saved Leann from getting killed when she arrived.

In the modern world, she had an eye-patch due to excessive eye strain of some sort. She was forbidden to use smartphones and that’s when she’s read the novel. After her eyes healed, she saw a red string tied to her wrist. She couldn’t touch it but she could see it. So, she followed it until she fell straight into a manhole. Five years later, she’s still there.

How did Leann meet the characters?

One night, when Lucia was walking outside the temple, she saw an unconscious, injured man with many red strings all over him. After healing him, a red string of fate tied to her wrist appeared and connected to the red string on the man’s heart. This meant their fate are tied together and that if the owner of the heart dies, the other one dies, too. The next day, he went to the temple and looked for her. It was Abell.

How was Leann and Abell’s relationship?

Abell asked Leann to go with him. She refused. So, he secretly followed her an listened to her monologue. He found out that he was gonna die soon. The next day, monsters were hunting Leann left, right and center. Apparently, Abell could feel it if Leann’s in danger. The lies… Then, he intimidated Cercopia into letting Leann go. She clearly said no but he literally dragged her to hell.

Then, he confronts her about his death. She half-lied about it but continued to stay in hell. She became his first aid kit. He went to battle everyday and went to her to heal him every night. Since Abell was half-god, no priest or priests could heal him the way Leann does.

After making Leann his personal first aid kit, Abell forbade Leann to heal other living beings. His reasoning was it could kill Leann in the long run. She was clearly exhausted after healing him every time.

Leann sympathized with Abell knowing that he became the Lord of the Temple after all his family members died. He fell in love with Saint Lucia because she’s immortal. She was the only person he could love who couldn’t die. Because of this, Leann decided she would stay with Abell until Saint Lucia arrives. He stopped all the soul hunting after Leanne collapsed over healing a soldier.

Earlier, Leann also meets Carine when he walked her to her room. He was Leann’s favorite character.

What does the novel say about Carine?

Is Abell really a psychopath?

Abell treated Leann like a property. He kept Leann with him while he was working in a room, panicked when she almost left sight, threatened to kill Carine when he heard Leann laugh over something Carine said and dragged her away from him in the middle of conversation. One word: CREEPY.

After dragging Leann away from Carine, he told her where his heart was hidden. Leann hinted at Abell meeting the person who would save him at some point. He got angry and insinuated that Leann was gonna leave after using him. In the first place, he was the one asking to heal him every time he went soul hunting. Leann pointed this out but made a bargain. She would help him become immortal and in return, he must protect her. He kept asking if Leann had feelings for her. How many times a girl’s got to say no before this sinks in? Hmm?

And when she said no, what did he do? He went batshit crazy, threw a tantrum and destroyed his temple and the souls he hunted. He got hurt doing it, too.

When Abell saw Leann got hurt from Nefer’s arrow, he stopped and treated her. She then asked Abell if he liked her. He paused, she got scared and then changed the subject to healing Abell. She started cutting off the red strings. While doing so, she accidentally saw his peepee. Abell yelled and she left.

When she left Abell, she ran into Carine. He introduced her to Sleipnir. Sleipnir had eight legs. Because of the horse’s black mane, it reminded Leann of her cat called Verr. A few days later, Leann and Abell were on speaking terms again. Abell drew Verr and magically came out alive from the paper. He even asked if he should kill it to keep it with her forever.

How did the rebellion start?

Earlier in the story, Leann already heard about the rebellion. They didn’t want to serve Abell because he was only a half-god. Leann already knew about this and she knew they were just biding their time.

One night, when Abell was away, Leann overheard the monsters about looking for Abell’s heart. Leann races to the room and got Abell’s heart first before the zombies. She didn’t get very far when she tripped and got discovered. Chase ensued. She ran into some monster named Sir Yuuda.

Sleipnir rescued her away from the monsters. The horse got tired and they both crashed to the ground. Abell arrived before the monsters get to hurt Leann. When the monsters weren’t able to convince Abell that Leann was on the run to steal his heart, they attacked him.

What was Carine’s secret?

Abell was obviously outnumbered. Carine swooped in and attempted to take Leann to safety. Dementor-looking demons flew and attacked them. Carine transformed into a full-angel battle gear —white hair, white wings and white and gold attire. He was born in Luce and he asked Leann to keep this a secret. The thing was, this wasn’t in the book…

How did the rebellion end?

Leann couldn’t bear to just leave Abell. She could feel his pain. Without any plan whatsoever, she went back. Of course, she got caught up in the battlefield. After she got hurt, she passed out. Sleipnir told her that the Temple of Death crumbled to the ground. When she awoke, Abell was lying unconscious on the ground. Leann healed him through breathing on his mouth. Yeah, it was a kiss. Abell was blushing furiously over the thought.

What happens after the rebellion?

Leann, Abell and Sleipnir went back to the Temple of Remda. Who knows where Carine is! He emitted light like the chosen one during the battle. That was here I last saw him.

Anyway, Abell told Leann to hide his heart. Velsepone, a pine spirit, showed up on her doorstep. He got herbs for her because she’s a healer and she got hurt. Abell burnt Velsepone’s hand. Of course, Leann got angry.

First off, let’s start with her. She’s been stuck in the same place for five years. Did she do anything to escape? No. Not that we know of. She survived and she healed so many monsters.

She wasn’t angry being dragged to hell against her will. Apparently, Abell’s handsome face was enough to distract her. In fact, she willingly became Abell’s prisoner for at least one year. Ok, given that she sympathized with his family dying, she could’ve set some ground rules.

She might still have a character development. But Abell? UGH.

Why is he the main lead?! He kept threatening anyone he got jealous of. Listen, people! This is the type of person you don’t get in a relationship with. He’s possessive. It’s freaking scary. He won’t take no for an answer. I get that he didn’t want Leann to be healing anyone because it hurts her. However, when he didn’t like it when he’s friends with anyone? He wanted Leann’s life to revolve around him?

Let us not romanticize these toxic behavior. No one is exempted no matter how good-looking they are!

This character was such a turn off to be honest…

This character is a mysterious one. He’s supposed to be the first one who dies in Saint Lucia’s harem due to the thick red threads on him. Is he an angel? If so, isn’t he supposed to be immortal? If Sleipnir is the eight-legged horse similar to Odin, it meant the horse is also from wherever Carine was from. Then, they’re probably.. gods?

Characters we haven’t met yet…

What does the novel say about her?

What does the novel say about him?

I didn’t expect this to be a reverse harem. I don’t believe I’ve had enough of the plot to judge this manhwa. It’s intriguing. What keeps me from reading further was the main characters. I don’t like the toxic relationship between them. I’m hopeful that Carine, Ahsand and Saint Lucia are gonna be better than them.