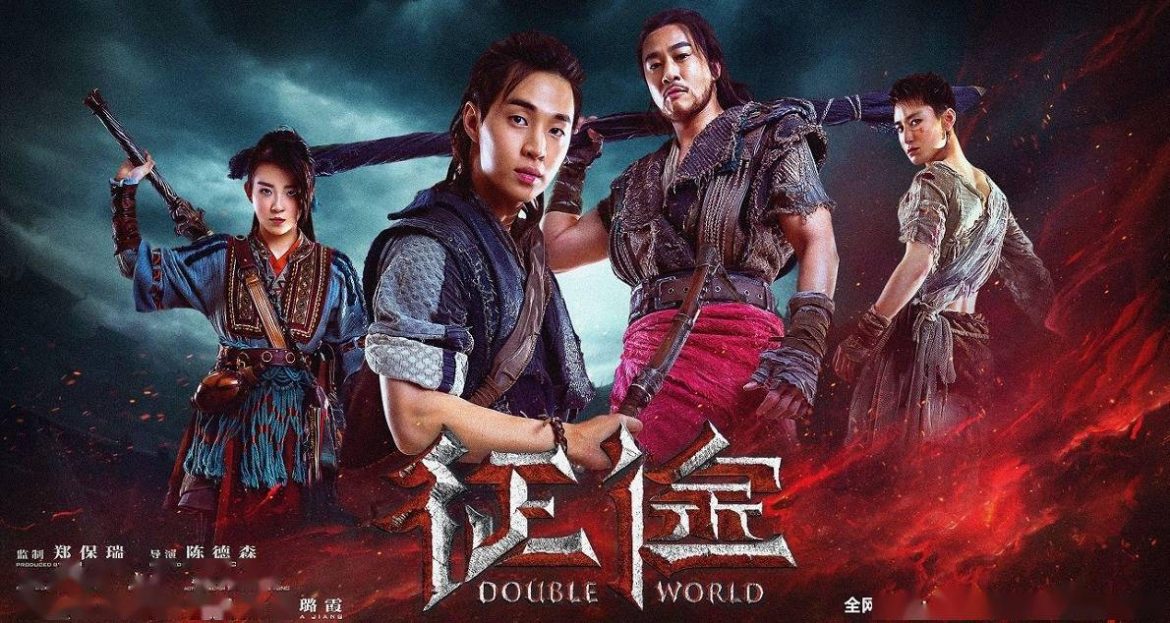 The Central Plains had two conflicting kingdoms, Southern Zhao and Northern Yan. A peace treaty brought an end to a long war between these kingdoms. After ten years of peace, Northern Yan’s failed assassination attempt of the Southern Zhao’s king provoked yet another war. Grand Tutor Guan summoned warriors to Phoenix City to host a competition for a new field marshal.

Dong Yilong was an orphan and a thief. Chu Hun was a war survivor. Both men and Cang Qiu represented the Qingyuan Clan for the competition. Upon losing Cang Qiu to the giant desert scorpion, they had to quickly recruit a new one to complete their team. Else, their clan would be implicated for treason. Jinggang was a thief and a wanderer who ended up completing the Qingyuan Clan warrior trio.

The main plot was easy to follow but it lacked a background story on the important parts. Let’s start with Northern Yan vs. Southern Zhao, I couldn’t take my pick. The Northern Yan’s king was faceless. The Southern Zhao’s king was too dumb for me to even bother. I don’t know why the Northern Yan wanted to invade the Southern Zhao. Is it only for territory? Were they fighting for resources of some sort? Was it somehow related to the Mystic Forest? I don’t know. But I could’ve let this pass if only there were more details in other parts of the story but the plot was a little hollow.

I like the introduction of Chu Hun and Yilong in Qingyuan Clan. Both of them were outcasts. This exhibited what kind of people they were and set the tone on potential character developments.

Bi Nu, from the slave market, was a nice touch. All war survivors lost at least a few of their loved ones. Regardless of their origins, survivors harbored hatred towards certain people or clan. It’s purpose was most probably to demonstrate why revenge was the main motivation for a lot of the people in this movie. Chu Hun was hellbent on killing Grand Tutor Guan. Bi Nu, the slave from the market, wanted to avenge her father and kill Chu Hun. I just think this arc was unnecessarily long screen time for this movie and it didn’t help the plot.

The sorceress and the Mystic Forest was also another waste of time. That forest did nothing except show the gold tattoo of Dong Yilong. How come it took too long to reveal that? They could’ve allotted some of that wasted time to enhance the plot.

For instance, the interesting character of Grand Tutor Guan could’ve used a little bit more of history. It was mentioned briefly that the Northern Yan installed him in the Southern Zhao’s kingdom. Surely, it wasn’t part of the peace treaty. He was already in the Southern Zhao’s camp when they had a war against the North. How? Why? It wasn’t clear.

The competition was great, too. I enjoyed the fighting and challenge part. The only thing that didn’t make sense was when the floating wingless dragon in the cave let Dong Yilong take the egg away. Human translation: “Can I borrow your baby for a bit? I’m gonna give it back later if I don’t die.” What kind of parent would lend its baby and trust a random stranger? Who does that? On that note, I was actually half-expecting the floating wingless dragon to get out of the cave and defend Yilong and friends when Phoenix City was on fire.

Dong Yilong wanted to prove to Qingyuan Clan and to himself that he can make people respect him and be a somebody in the society. Since I’m always “Team Good People”, he made it easy for me to root for him the entire movie. Despite being an orphan, he still had that innocence and kindness towards people. He openly accepted Jinggang as his teammate. Instinctively, he helped people or a floating wingless dragon in danger. Clan divisions meant nothing to him. I like that in a character.

I got excited when I found out he’s a royal from the Northern Yan. Dong Yilong being a prince or a future king or something was predictable. I was just waiting for his character’s big moment. When Wu Yang knelt down and greeted him as “Your Highness”, that made it real for him. There were internal and external conflicts brewing. I wanted to see that SO MUCH. I was waiting! First, I wanted to see him in the Northern Yan’s camp. Second, I wanted to see what he’d do to preserve the friendship he had with Chu Hun, the closest person he had to a family. I was waiting for Grand Tutor Guan to see his arm and see the look on that old man’s face. BUT NO. None of those happened.

While I like his character, I didn’t like how he barely grew as a person by the end of the movie. Sure, he had a purpose which was to go to the Northern Yan but that was it. It was a letdown to see Chu Hun and Dong Yilong part ways from Jinggang’s grave as the last scene. The ending could’ve gone further to the Northern Yan because I really wanted to see that. And Chu Hun was low-key looking out for Dong Yilong all the time. It would be nice to see him lose that blanket of protection and independently have his own adventures outside his comfort zone. There was so much wasted potential both for the plot and the character.

Side Note: Ooh Henry Lau! YASSSS! Last time I saw him was in Super Junior M. Well, would you look at that? The fangirl in me was grinning. I gotta say I was impressed by his acting skills and I’m low-key proud.

The annihilation of the entire Chu Army drove Chu Hun to participate in the competition and kill Grand Tutor Guan. He’s a war survivor. It’s logical that he had inner emotional trauma and struggles of his own. Yet, he was emotionally stable for someone who lost his entire clan right in front of his eyes. He didn’t bat an eye when Cang Qiu died but he would allow Bi Nu to kill him after he killed Grand Tutor Guan. He still had his moral compass intact.

During this competition, he struggled to let go of his desire to kill Grand Tutor Guan. For some reason, Dong Yilong and Jinggang were enough reason for him to abort his mission. Upon finding out Dong Yilong was a Northern Yan royalty in the Mystic forest, that was probably the last straw and walked out.

When he had another chance to kill Grand Tutor Guan again in the Mystic Forest, he surrendered in an attempt to save Jinggang. I was really glad he was able to kill Grand Tutor Guan around the end. The fact that he didn’t impulsively kill Dong Yilong showed great restraint and character development on his part. His ending was the only character ending I was happy about. He was able to set aside his anger and was able to forgive the fact that Dong Yilong was from Northern Yan. However, keeping his rational side, he wished to never meet Dong Yilong again because he knew it would mean they would mean war and they would be on opposing sides. It was such a huge leap from where he began as a character. His ending was the only ending I was happy about.

Jinggang and her giant blade made being a badass look so cute and adorable. First of all, I don’t know where she came from. She said her last name was Jinggang and her mother didn’t give her a name. Presumably, she’s a street smart lady or thief who taught herself martial arts to survive and had been alone all her life. This was probably why she clicked with Yilong because they were merely living and just surviving all their lives. With the competition, they found a sense of purpose.

It’s interesting how a lone wolf like her was open to change. She made friends and learned the meaning of loyalty along the way. All she wanted was to be remembered forever and make her mark in history but these flew out of the window in the name of friendship. She conceded defeat against Chu Hun and gave up wanting to be the Grand Field Marshal to prevent a combat against her new friends. And what did she get out of all that development? SHE DIED! Oh and she got a statue.

Ugh! A statue. Imagine the inevitable Northern Yan – Southern Zhao war, she could’ve brought Chu Hun and Dong Yilong together or she could’ve picked a side or pick no side at all and we can all see what happens. There was a lot of potential for her character and I didn’t see the point of her dying. She had undergone a major character development here and that was also wasted.

Grand Tutor Guan was the Southern Zhao king’s right hand turned out to be working for the Northern Yan. He’s cunning and manipulative. I love a good villain to spice up the story. And his plan of using the field marshal competition to let the mechanical Lingyan Pavilion burn the Phoenix city to the ground was genius. Who wouldn’t want a capable villain hidden in the enemy’s camp like that?

However, it made me question why it took him so long to take an action? Grand Tutor Guan was already in the Southern Zhao’s camp long before the treaty. I mean, OK he already refused to send reinforcements to Chu Army. He could’ve sabotaged Southern Zhao from the inside, sent the wrong information, stole food rations or whatever. He clearly had spies inside, too. Why did he wait for Northern Yan to take an action more than a decade later? He didn’t seem to have a remorse in killing the Southern Zhao king. So, what gives?

Though the plot was a bit of a let down, I still wish I watched this in the cinema. The cinematography, CGI creatures and world building were all great. You just know right off the bat this was a high budget film. It’s only logical I had high expectations from the first 10 minutes of this show. The acting was great. It was easy to root for the three main characters. They had their own charm and were very likeable. The movie did everything right except for the plot which was the most important part. As I previously mentioned, I just wish they reduced the useless scenes and added more to the story.

I would definitely watch if there was a sequel because things just got interesting. This was probably filmed with the intention of having a sequel movie but I Googled and saw no updates.