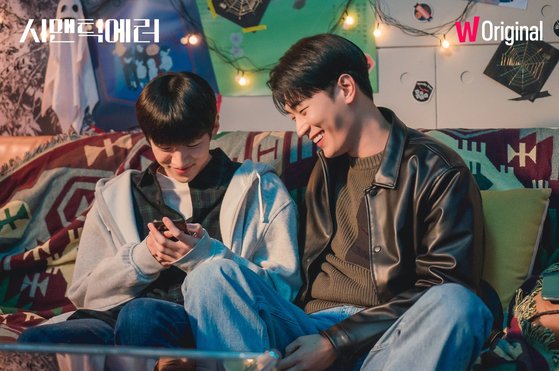 TikTok’s BL algorithm got to me and I caved. Hence, I’m temporarily abandoning all the non-BL / non-queer dramas I’ve been watching indefinitely. Who knows! I’ll probably get back to it once I’m in the mood.

Chu Sangwoo, an engineering student, omitted the names of the students who didn’t participate in their group project. Jaeyoung along with other students in the group hunted down Sangwoo and failed. As a consequence, Jaeyoung, a design student, failed to graduate. His plan to study abroad was also delayed.

Meanwhile, Sangwoo was working on a mobile app. When his initial designer got a job, she backed out the last minute. A design in their school exhibit caught his attention and he requested to be introduced to him. The designer was Jaeyoung. When Jaeyoung found out Sangwoo wanted to meet him as the new designer, he took the bait to get his revenge. When the two finally met, Sangwoo realized Jaeyoung was one of the sunbaes he threw under the bus during his presentation.

Man, I swore to never watch another student drama but with a dev and a designer as the main lead, how can I not watch that? Plus, they were both great at what they do. I like a powerhouse couple.

I immediately liked Sangwoo’s character. Genius and introvert who won’t share credit with anybody who didn’t deserve it, even his sunbae? Introverts are mostly represented in media as pushovers, weirdos, psychopaths and/or serial killers. I like that in this drama Sangwoo is just a normal person. The bar is in hell but hey, this is progress. It’s about time to raise the bar to the floor. I’m expecting some repercussions of his actions but this drama only have 8 episodes. I hope these are enough to cover the plot without me feeling everything’s happening way too fast.

As for Jaeyoung, hmm.. I don’t really get how he had a cross-department, cross-school year level project with Sangwoo where his failure to comply impeded his graduation. I’ve never heard of this and it never happened to me when I was studying. For arguments’ sake, let’s assume everything that happened is normal. I like that Jaeyoung was not your typical bad boy who had poor grades and just strut around the campus grounds looking cool. He was actually good at what he does and he’s a popular student. What doesn’t make sense is how come Sangwoo has another project with students from different department and year level again?

There’s not much to ramble on in the pilot episode. It’s barely 20 minutes long and there were so much going on in the first episode. There were so much people surrounding the main characters. I had to tune them out as white noise. It could be because there are only 8 episodes and all the information had to be crammed as much as possible in one episode.