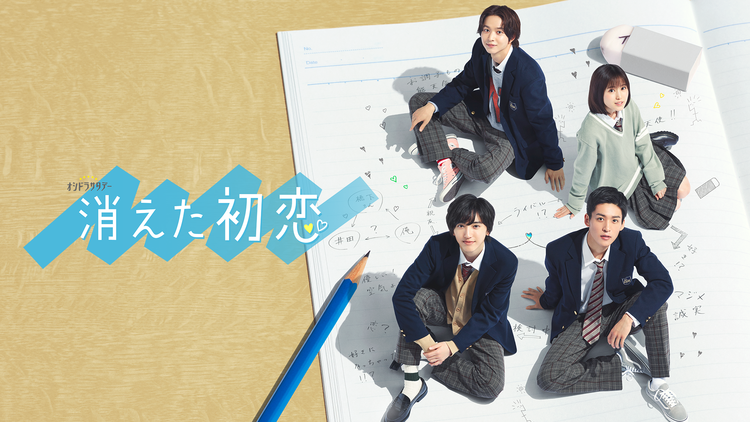 Before I begin, let me just say there’s a victim in this Ida x Aoki (or as I call them Idaoki 🧡) eraser love story agenda… Mametarou. The cutest guard dog got replaced as Ida’s mom’s wallpaper. He didn’t deserve such hate crime. Kidding aside, here’s my final review of the series.

Aoki liked Hashimoto. Hashimoto liked Ida. Ida was out there minding his own business and liked nobody. A series of events led Ida to conclude that Aoki likes him. Although Aoki was rejected in the beginning, Ida had a change of heart and said he had to think before making a decision. Aoki slowly developed feelings for Ida. Hence, he never corrected Ida’s conclusion and made that the established truth. It was true, anyway.

Meanwhile, a friendship blossomed between Aoki and Hashimoto. Aoki found out Hashimoto liked Aida, not Ida. Despite his fear, Aoki came out to Hashimoto and told her he likes Ida. School days went by and interactions between these four students became more frequent. Eventually, the misunderstandings were cleared. Though Ida clearly said he was still unsure of his feelings, Aoki and Ida started dating. Hashimoto tried to win Aida’s affection.

Apart from learning the ropes of dating, Ida and Aoki had another problem: dealing with homophobia. Ida had no intention of hiding his relationship with Aoki. External factors doesn’t concern him. Afraid of rejection and judgement from their peers and teachers, Aoki wanted the opposite. If there’s anything we can learn from history and fiction, secrets have its own way of making itself public. Hence, some classmates and teachers eventually found out about Ida and Aoki. Mr. Okano, Aoki’s tutor, flipped a 180 upon witnessing the couple holding hands on a bridge. Aida and Ida’s volleyball team mates were supportive. This difference between them led them to break up.

Finally, Ida confessed he liked Aoki and the two were back together.

As I said, I wasn’t expecting much in terms of plot twists. It was predictable. The pacing was just right. The things that surprised me were:

I was obviously expecting a love triangle between Hashimoto, Ida and Aoki. Instead, Aoki and Hashimoto were attached to the hip and became BFFs. Funny how that turned out.

I wasn’t really a fan of Hashimoto chasing Aida so damn hard. Was there anything wrong with shooting your shot with a guy or anyone? No. Absolutely not. But she’s been rejected twice already. In the end, she was successful but I felt like she deserved better. Hashimoto was fun to watch. Her dynamic with Aoki was one of my favorites. Plus, she’s no pushover. She stood up for Aoki against Aida when her friend’s secret was on the line.

I was expecting Mr. Taniguchi to be a homophobe from the beginning. I knew he knew about the Idaoki couple and he shuffled the seating arrangement and had them sit apart. Maybe, it was to prevent rumors from circulating? Who knows!

Mr. Okano was the proof that younger generation doesn’t automatically mean open-minded. He was terrified of Aoki just because he is gay. Sadly, people like this still exist in the real world. It was difficult for me to believe that their differences in opinion were resolved over ramen.

I was disappointed that Aoki and Ida never really broached the subject of who’s allowed to know about their relationship. It was a great source of stress to Aoki and would’ve been the important part of their conversation. Hence, this wasn’t resolved for me. I kinda wish there’s a season 2 but I doubt that would happen.

Ah! The cute and bubbly bi student with a flair for the dramatic! Aoki’s good-natured personality made him a very likeable character. He also handled rejections quite well. He though Hashimoto liked Ida. Aoki still chose to keep her secret at the expense of Ida thinking he’s gay. Ida rejected Aoki in the beginning. Aoki tried to setup Ida with Hashimoto.

While Aoki wasn’t shy per se, there were things he was scared of doing such as coming out to his friends, confessing to Ida, getting better school marks and dating Aoki. He did all of this. Sure, sometimes he doubts himself but he was able to overcome it. I like that he also had a flaw of being a little to self-absorbed, at times. Aida pointed this out The show revolved around him. It humanized the character for me.

Michieda Shunsuke, the actor, is adorable AF!! Sometimes he has this exaggerated acting that doesn’t work for me but that’s ok. Since the show’s pace predominantly revolves around his actions and the consequences of his actions, I can feel the gay panic and the secondhand embarrassment from all directions throughout the show. After finding out he had a JPop idol background, I was impressed. There’s definitely a room for improvement. Around 90-95% of the emotions can be seen through his expressions. Admittedly, Michieda Shunsuke was much more entertaining to watch compared to Meguro Ren who played Ida.

And here we got the stoic other half of Idaoki. Of course, who else would be a suitable match to a ray of sunshine that is Aoki? Ida. I’m just gonna say how in the world was nobody interested in him, hm? I mean, c’mon! Handsome, sporty and smart. Were the girls in that school blind? Seriously, tf?!

Anyway, his character initially defined the world around him as black and white. He directed his energy to the things that mattered to him. Everything else was tuned out. Aoki’s presence, for example, was just a background noise until he saw the eraser with “IDA 🧡” on it. He tried to figure out how this happened. Although he had his preconception of the norm and rejected Aoki in the beginning, he was moved by Aoki’s sincerity and was willing to ponder things over. Curiosity led him to basically collect data, compare and analyze how he felt. He wanted to know how it felt to like someone.

The character development came in a form of Ida taking a leap of faith and hoped for the best. Since he’s mostly in his head and other people’s opinion doesn’t bother him, it was foreseeable from the beginning that he doesn’t mind dating Aoki out in the open. He’s the type who’s slow to warm up and again, oblivious to other people’s feelings around him. He became more sensitive to people’s feelings around him as the show progressed.

While I cannot fault Meguro Ren’s acting so much and I was more satisfied of his acting skills, there wasn’t a lot to work with. He kept a poker face for the most part. His micro expressions worked most of the time for me.

Do I recommend this show? If you’re out here looking for a meticulous plot with twist and turns every so often, look elsewhere. However, if you’re you’re looking for a lighthearted and feel-good show, then you’re on the right track. This show is about first love, student life and coming of age.

As for me… Well, guess who’s back in the JPop train? Good Lord! I am really running out of songs to sing in karaoke. I listen to everything but English these days.