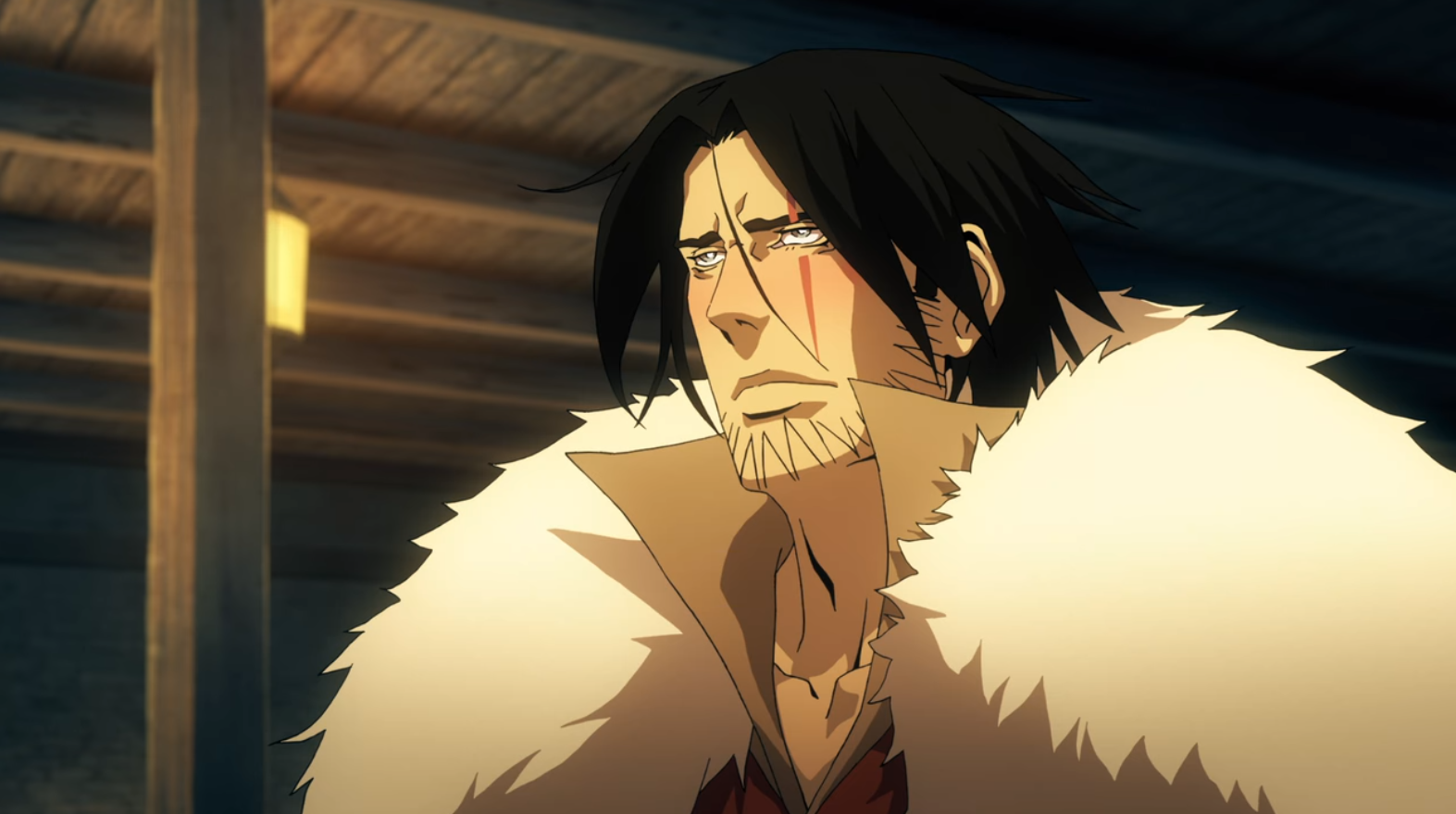 I made a recap and review of season 1 episode 1. If you haven’t seen it already, feel free to check it out here.

In this post, I will be doing a recap and review of season 1 episode 2 of Castlevania called Necropolis. Here, we were introduced to one our main characters, Trevor Belmont. He came from a family of vampire hunters. Trevor B. was drinking quietly in a bar in the middle of nowhere and he overheard lies about his family such as:

Of course, we all know Belmonts were the scapegoats of the church. The church didn’t want to admit that they caused Dracula’s anger and that demon horde. And like teenagers who wanted drama, they made up stories to cover up their asses.

Trevor tried to  avoid trouble but his family crest was recognized and got into a fight, anyway. Belmont gets into  a bar fight. Sleeps under the tree. Went into Gresit. Finds the aftermath of the night hoard attack. The dead people under the bridge, the poor people trying to survive, getting rid of the dead bodies and cleaning up internal organs scattered around the city. He bought his breakfast and he starts asking around. He finds out 2 important things:

And he also finds out that there are still loyal followers of the church despite all the demons they cannot drive out of the damn city.

As Trevor walked around, he witnesses Christian priests harass a speaker. They were blaming the speakers for bringing evil to the city. They had knives and the old man was unarmed. Once he was certain that these priests were gonna kill the man, that’s when Trevor defended the speaker. So he got into a fight and injured two priests.

Trevor, gets invited into the speakers’ hideout. There were twelve of them but one is missing
Trevor tried to convince speakers to leave because rumor has it people hate them and blame them for Dracula’s monster invasion. Again, another scapegoat.

This is where Trevor learns the truth Dracula’s wife was burnt in Targoviste a year ago and the church spreads the fake news to divert attention away from themselves. Those sneaky bastards! They wanted to find the missing speaker (grandpa speaker’s grandchild). So he makes a bargain with the grandpa, leave the city before nightfall, if he finds the grandchild.

Grandpa didn’t have so much choice did he?

The horde was out and about terrorizing Wallachia. Dracula was probably somewhere, watching the people fight for their short lives. People are dying left, right, center. The church finds anything and anyone to blame but themselves. The stage is set. Now, we meet our first hero. Yes, hero. The first of three. Trevor Belmont. In this episode we see how people live as preys to the horde Dracula ordered from hell. He continued to survive but without purpose. He had so much potential that I could not wait to see. I mean Dracula has gone nuts. Somebody had to stop him, obviously.

Trevor Belmont. Vampire hunter. Outcast. Last living Belmont. First of all, if he didn’t want to be recognized in public, he shouldn’t have worn a family crested shirt everywhere he goes. I mean, he knew people hate him. Maybe, wear it backwards or something. Then again, maybe he just didn’t care. It’s the last thing that reminded him of his identity. Speaking of identity, if he hasn’t lost a fight to any monster or human, it meant he was old enough to fight when his family died. Watching him just surviving but not living is sad. People hate him for his name alone. His skills was what Wallachia needed at that time. On the good side, even if people hated him, he didn’t hurt them. It takes a lot to take the high road when people have condemned your family and the Church ordered to kill them. If he wanted to, he could kill all of them. Plus, he offered to help the grandpa just so they’d leave the city. I’m so proud of him. I’m rooting for him to utilize his skills.

The Speakers. Hippies. Serves the people. Records knowledge through memorization and word-of-mouth. They don’t like to use pen and paper to write down their knowledge. I mean… even cavemen recorded their stuff through cave wall drawings. I don’t get this. Anyway, they’re on the mission to help out people. It was later revealed that the grandpa didn’t want to leave the city because he’s still waiting for his grandchild to return or to at least find the body so he can bury it. He even had to endure the priests harassing him on dark alleys.

Dracula’s Demon Horde. Why do the demons have a downtime? Were they full and needed a nap? Hiding? Recharging? I want them to be terrorizing the humans everyday, all day. Why are they hiding in the forest? I need answers.

The People. In the morning, we see a bunch of dead people under the bridge from Trevor’s point of view. There were people in the market selling goods, some were cleaning the blood and organ which decorated town. It’s sad that the only ones these people listen to are the dumb people from the church. On another note, how are these people still alive? I want to know where they’ve been hiding.

The Clergy. First off, hats off for playing the people like a violin. Thanks to them, they just detonated the bomb to get the human species to be extinct.